Syracuse is the city of Italy that preserves more Greek history, in fact, its own name already transports you to the ancient Greek Empire. Syracuse was the most important city in Sicily during the splendor of the empire. And as we could see, that sublime wealth has remained to this day; especially on the Ortigia Island. Here we can still see the limestone columns of a majestic Greek temple supporting what is nowadays the cathedral.

Syracuse is the greatest example of the integration of centuries of history that I have ever seen. That’s why it’s my favorite of the cities we saw on our 10-day Sicily trip. Cycling through Ortigia and snorkeling in the incredible protected marine area of the Plemmirio just 20 minutes from the center of Siracusa is a privilege.

In the gelateria Fiordelatte we took one of the best ice creams of the trip. The creaminess of  their creations is unbeatable. In addition, the infinity of flavors and the friendliness of the staff made it my favorite Sicilian ice cream shop. If you go to Syracuse you cannot miss it; to have breakfast, to have lunch and even to have dinner. Ice cream for everyone!!

This 5C BC theatre, one of the largest monuments from antiquity, was carved into the rock using the natural slope of the Temenite hill. Inaugurated with Perseus by Aeschylus (think about it), it was built by Damocope, also known as Myrilla. Transformed by Hiero II, it was then adapted by the Romans to hold gladiatorial combats, then by the Spanish who set up watermills there. 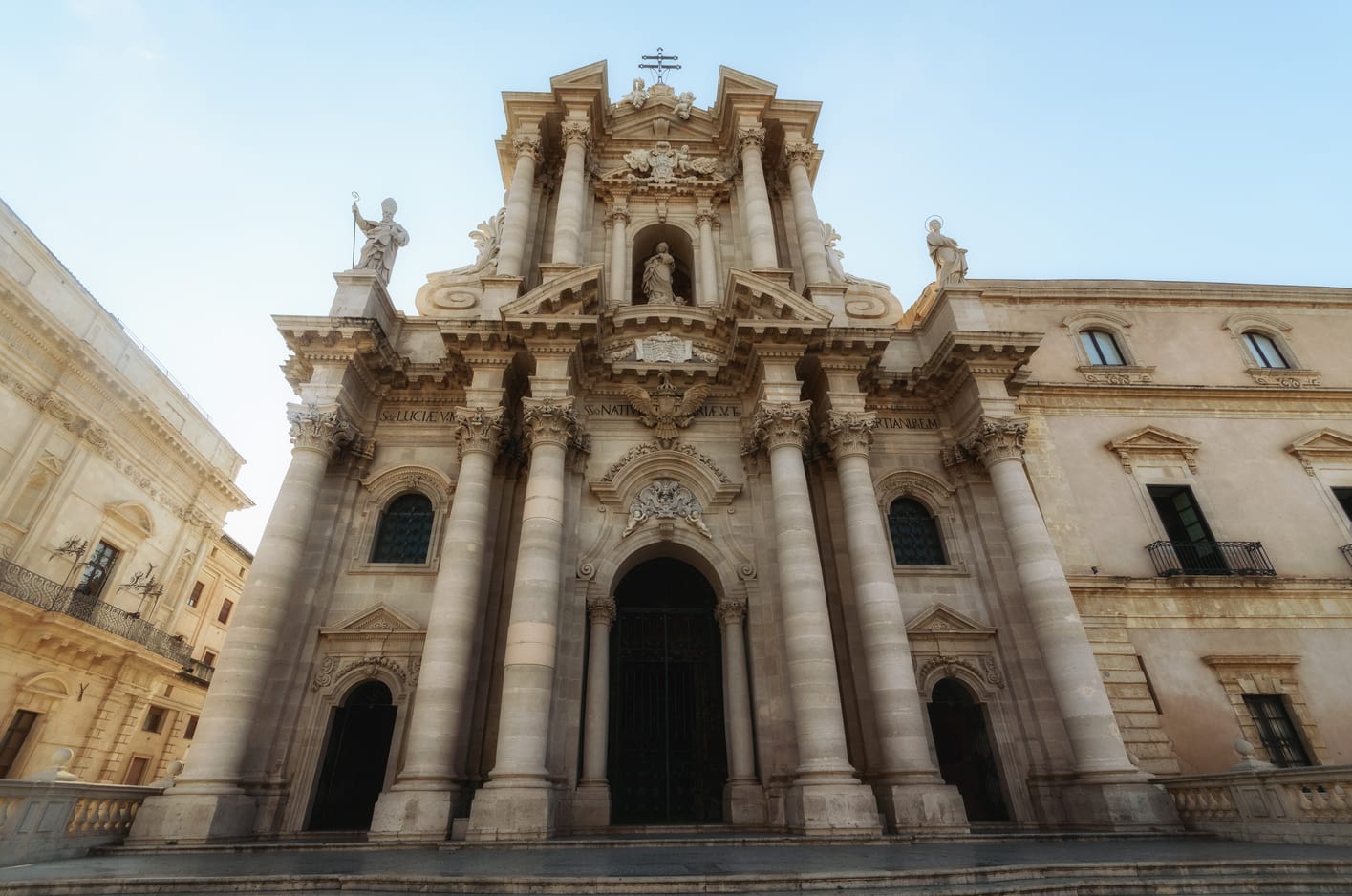 This was first a temple built in honour of Athena then transformed into a church in the 7C; it was remodelled in the Norman era, before collapsing in the earthquake of 1693. Entrusted with the reconstruction, Andrea Palma respected the old structure, based on columns. Those of the former temple remain in the right side of the building. Inside, there are numerous statues by brothers Domenico and Antonello Gagini.

Ortigia is an island of only two square kilometers that connects with the island of Sicily through two short bridges. Visiting this landmark is the most important thing to do in Syracuse.

After crossing the Ponte de Santa Lucía, the esthetic of the streets radically change compared to the rest of Syracuse. 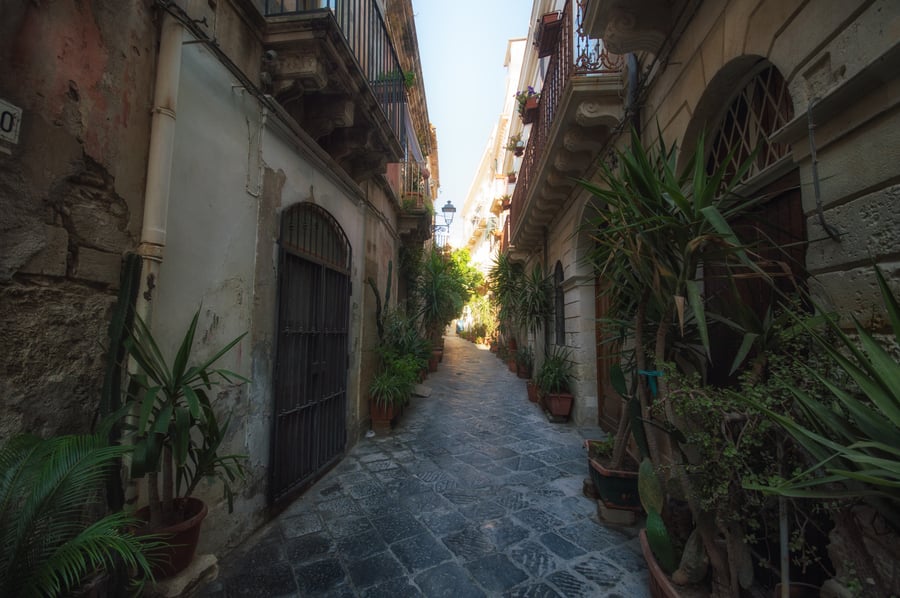 Noto, the stone garden or the Sicilian Baroque Jewel, as it is also known.

A wide staircase in front of the building is flanked by two raised platforms planted with trees, joined by a paved path which underscores the building’s sinuous curves. The rich Baroque façade is quite stunning. Inside the dome and ceiling of the nave were decorated in the 2010s. A small museum relates the history of the edifice’s reconstruction. Flanking it on either side are the episcopal palace and the Palazzo Landolina di Sant’Alfano. A superb ensemble!

It was a quick but unmissable visit for me, addicted to chocolate. Modica is a benchmark in the cocoa industry. The type of chocolate produced here is made by cold processing, the same recipe used by the Aztecs. Although the taste can be similar to any good chocolate, the texture is completely different.

During the production of this cocoa the dough is not melted, and consequently the final texture is granular. I recommend you to try it in the Antica Dolceria Bonajuto, the oldest chocolate factory in Sicily, since 1880. The decoration is beautiful and the best, they let you taste all kinds of flavors; with salt, chili pepper, pistachio, 100% black, etc. 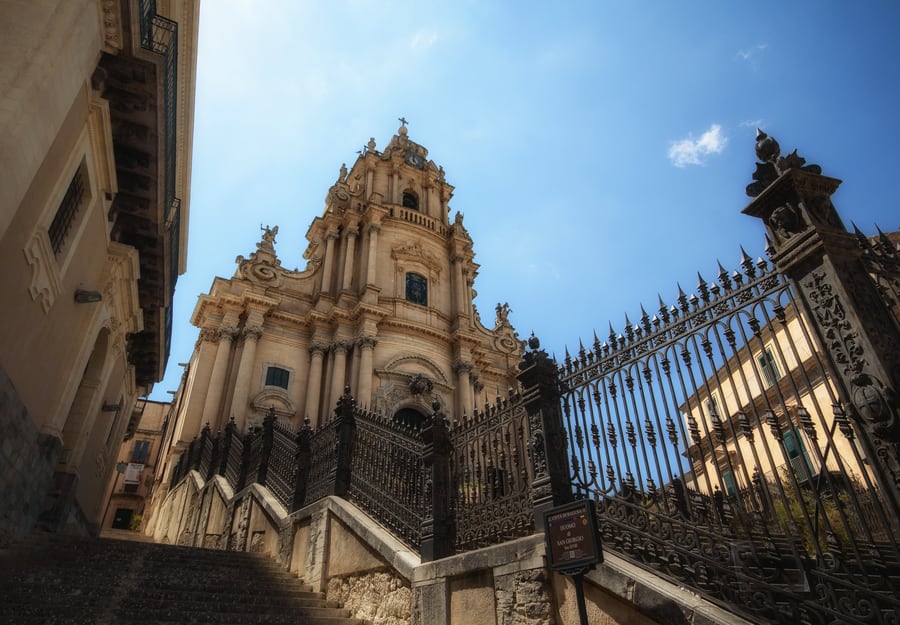 The origins of the castle go back to the mid-17C, but it was reworked until the early 20C. On the façade, you will notice the elegant, Venetian Gothic-style loggia and the trefoil arches of its gemel windows. Inside, the great hall of coats of arms is worth visiting to see the nobiliary insignia of some of Sicily’s foremost families painted on the walls. The trompe-l’oeil ceilings in the Hall of Mirrors, the Music Room and Billiard Room are fabulous.

https://travelguide.michelin.com/europe/italy/sicily/ragusa/ragusa/ibleo-garden-giardino-ibleo
This garden at the furthest point of Ragusa Ibla is home to a number of churches: San Giorgio Vecchio with its rich Catalan Gothic portal, San Giacomo with a historiated ceiling dating from 1754 (the false dome in a trompe-l’oeil style is quite beautiful) and finally the Chiesa dei Cappuccini which has an attractive triptych by Pietro Novelli.